January 5 is finally here for Georgians eager to cast their votes on the US Senate runoff elections. The polls are all over the place, with most of them showing differences between the candidates that are within the margin of error. The site FiveThirtyEight published a final average of various polls which put Ossoff (D) ahead of Perdue (R) by 1.8%, and put Warnock (D) ahead of Loeffler (R) by 2.1%.

Continuing our previous analyses of the candidates’ social media accounts on December 21 and December 7, we will now present a final update of their social media data as of January 4 (eve of the election), and use the same methodology as before to estimate the percentage of likely votes to each candidate.

Jumping to the Predictions

If you just want to see our social-media-based predictions, here they are.

If you would like to know how we came up with these numbers, please read on.

As of January 4, 10am EST, the total number of fans and followers of each candidate on Facebook and Twitter, was as shown below. The relative positions remained the same as in our previous analysis on December 21 with Ossoff leading, followed by Warnock, then Loeffler, and lastly Perdue.

The figure below shows the number of fans and followers that each candidate gained in each of the past five weeks, and the percentage increase over the base number at the beginning of each week. The percentage gains of all candidates, last week (Dec/29-Jan/4), were similar (4.0% for Perdue, 4.1% for Ossoff, 4.7% for Warnock, and 4.9% for Loeffler), but the increases in absolute numbers were particularly impressive for Ossoff and Warnock, adding over 38K, and 29K fans and followers, respectively, in one week. 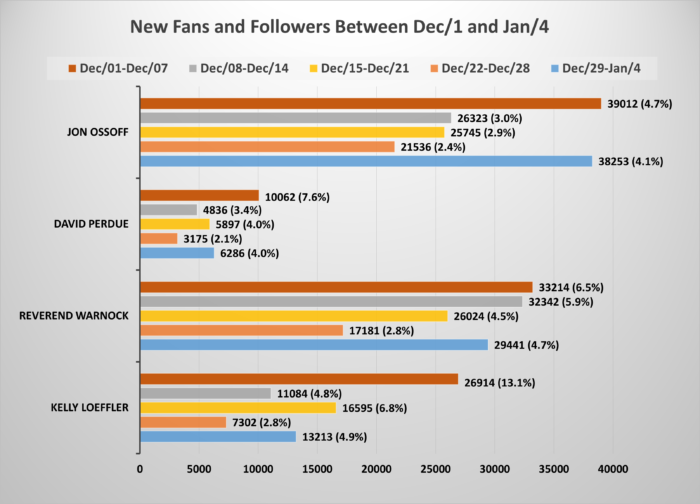 We also looked at the relative numbers of fans and followers gained by each candidate. For each 100 new people who started following any of the candidates on any given day, how many followed each candidate? The following figures look into these numbers pairwise for each senate race for the last six weeks.

The figure above breaks down the distribution of new fans and followers for both candidates, Jon Ossoff (D) and David Perdue (R), between November 24 and January 4, as well as the total in the period. Although there are some daily fluctuations, Ossoff is clearly maintaining a steady lead on the percentage of new fans gained daily. Overall, for the last 6 weeks (up to Jan/4), for each new 100 fans and followers, 83 sided with Jon Ossoff (D) and 17 sided with David Perdue (R).

In our previous blog we outlined the methodology used for estimating the number of votes to each candidate based on their social media data. For the sake of completeness, we will repeat the description here.

The figures at the top of this blog illustrate the percentage of likely votes per candidate, per day, and the final value for the regular and special elections. The initial percentages on November 23 are based on the numbers of votes that each candidate received on November 3, plus voter migration as explained in step 3. and 4. above.

In both races the edge of one candidate over another is within the margin of error of election polls (usually 2% to 4%), so it can certainly go either way. It may be a few days or weeks before we know the final vote counts in Georgia, and it will certainly be interesting to find out how our simple social-media-based estimates fare against expensive and somewhat unreliable traditional polls. 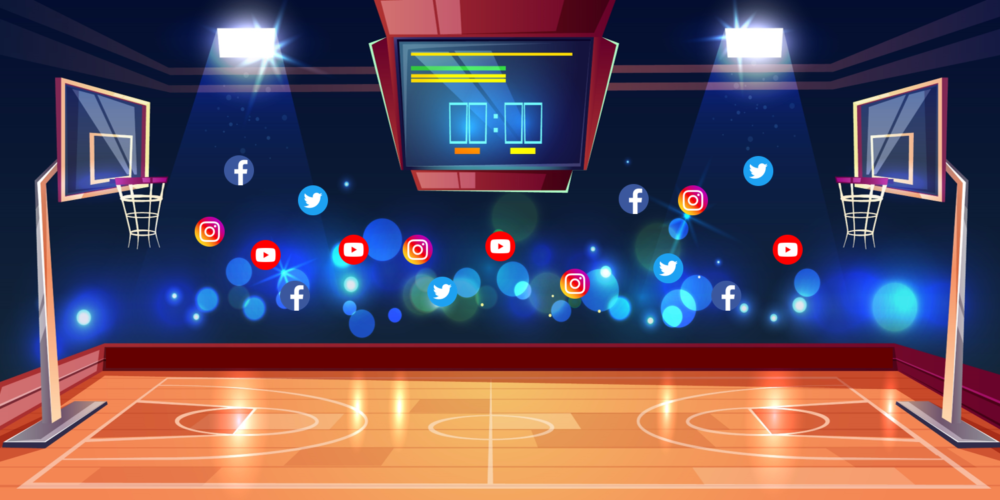 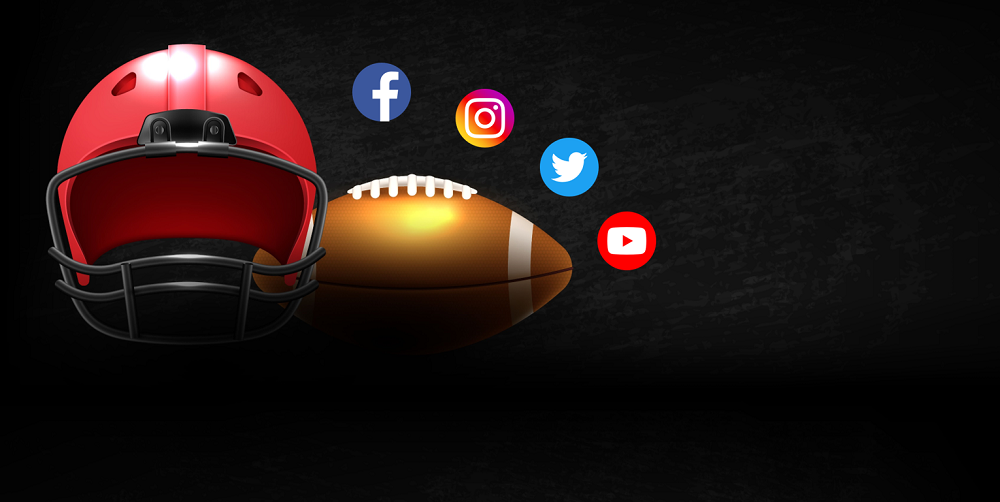 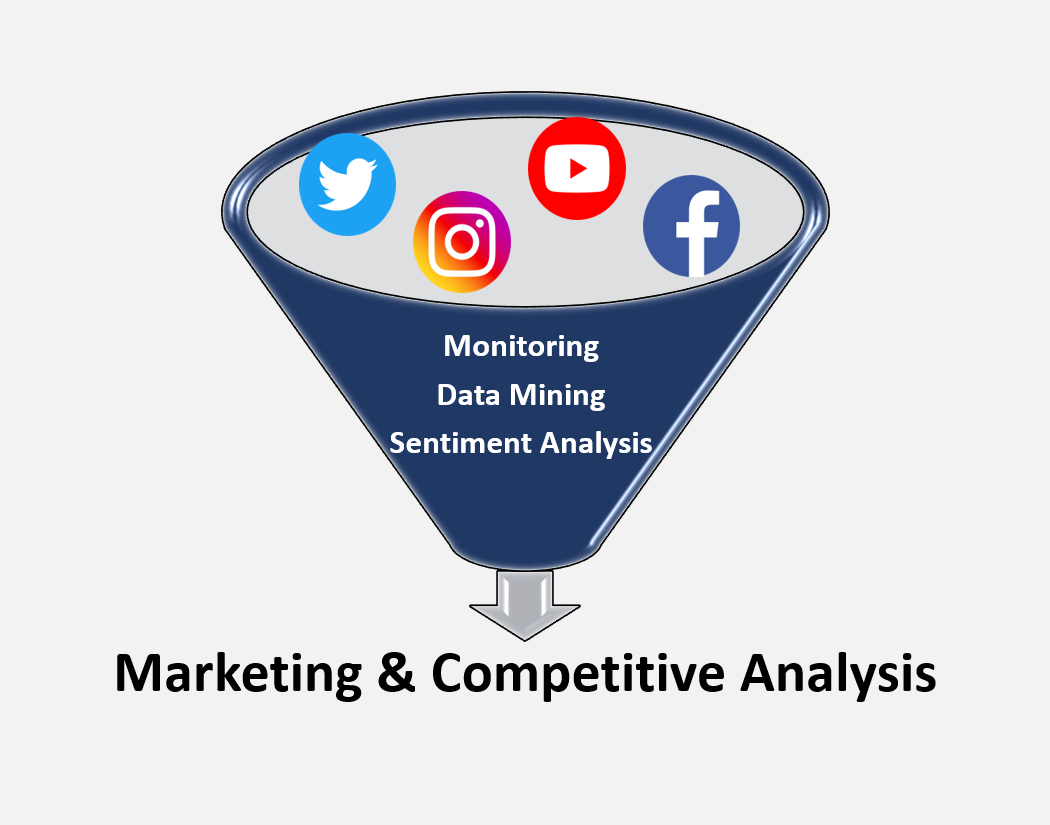 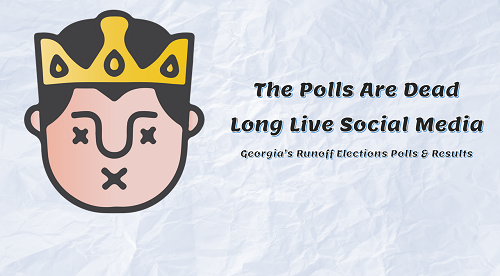